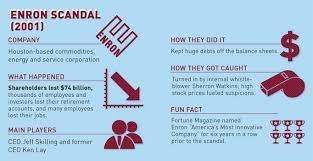 The board of directors’ main role is to represent shareholders’ interests. The board thus aims to maximize the firm’s value or its stock. The board oversees the recruitment, compensation, and activities of senior managers. Consequently, the roles of compensation and audit committees have received particular scrutiny since 2002. The makeup of the Board and its committees has also been discussed extensively because the prominence of non-independent members on a board or its committees may affect the way the board functions.

Below we analyze the Enron case, but similar conclusions could be drawn from other cases like that of WorldCom. The Enron case raised many questions about corporate governance, which we can define as a management or control system that can reduce conflicts of interest between shareholders and senior managers (or officers). Manipulation of information by senior managers was an important element in the events leading up to the Enron bankruptcy in December 2001. Enron used several risk management tools including derivatives, and was an important intermediary in the trading of these products.

Even specialists generally find it difficult to assess the total risk of a firm, particularly when financial statements use mark-to-market value rather than historical book value. It seems that the capital market as a whole could not identify many potential management problem signals or problems with information disclosure in the months preceding the Enron’s bankruptcy. Also, they could not anticipate its financial difficulties.

Arthur Andersen faced several accusations and found itself in a conflict of interest because it had simultaneously assumed the role of independent auditor for Enron while serving as a consultant for the firm. To correct this type of situation, the US Congress created the Public Company Accounting Oversight Board (PCAOB) via the Sarbanes-Oxley Act of 2002. The PCAOB’s roles include requiring external audit firms to register with it and setting standards for audit, quality control, ethics, and independence of these firms.

According to several observers (e.g., Healy and Palepu, 2003), Enron’s board of directors also failed in its role of protecting shareholders and contributed to the firm’s bankruptcy. Several board members held information on Enron’s management practices such as very high compensation of senior managers and of some board members, and disclosure of false statistics on the company’s growth potential to increase the value of stock and options. These board members chose to ignore them or did not disclose them to shareholders.

The Enron executives were compensated largely by a system based on the firm’s stock options. For example, the CEO received over $140 million in compensation during the year 2000, whereas his base salary was slightly higher than $1 million (Demski, 2003). This form of compensation was a major factor in distorting managers’ behavior. Stocks’market value is heavily influenced by expected future income. In the Enron case, top managers manipulated earnings reports to influence share value. They also overvalued assets and undervalued debt.

Researchers recently showed, using data from 31 countries, that managers’ manipulation of earnings is positively correlated with the benefits they derive from this practice (on manipulation of earnings by firms, see Lev (2003) and the references in the article). The authors were surprised to note the extent that Enron’s executive compensation committees kept silent about data manipulation by senior managers. Were these directors really incompetent? Were they in a conflict of interest because they were paid themselves by stock options? Did they have holdings in other companies that were doing business with Enron?

Evidently, the Enron case hinges more than the agency relationship between executives and their shareholders via directors. As mentioned above, the independent audit firm was questioned, along with the internal audit committee. Yet it is possible that financial analysts, brokers, consultants, bankers, attorneys, and investors were not all independent. Even the regulation may have introduced distortions. As Demski (2003) explains, a general analytical framework that covers all these players could be used to evaluate the situation more precisely. However, no such framework exists.