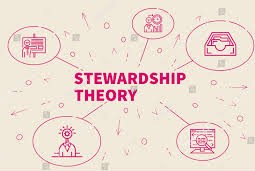 The stewardship theory is a part of corporate governance and is a normative alternative to agency theory. Simply, the stewardhip theory is a theory that managers, left on their own, will act as responsible stewards of the assets they control, and describes the existence of a strong relationship between satisfaction and organizational success. This theory was introduced by Donaldson and Davis (1989). Good stewards work collectively rather than individually and are not instrumentally motivated, as are agents who subscribe to agency theory. Stewardship theory basically argues that a steward recognizes that individualistic, opportunistic, and self-serving goals will be met if work is done for the greater good of the organization.

Stewards are motivated by intrinsic rewards, such as trust, reputational enhancement, reciprocity, discretion and autonomy, level of responsibility, job satisfaction, stability and tenure, and mission alignment. Fundamentally, stewardship theory relies significantly on the principal’s and steward’s initial trust disposition. Motivational support is positively linked to stewardship behavior. The interpersonal relationship within the stewardship concept builds mutual trust between the leader and the follower through relational leadership behaviors. Other than that, contextual support positively could influence the creativity and linked to stewardship behaviour and to motivational support as well.

As seen on the picture beside, the stewards needs intrinsic and extrinsic motivation to protect and maximize the shareholder’s wealth so both could empower trust. Or similar to the company’s performance may increase because the nature of the trust and loyalty of company managers to commitments in company.

The essence of the stewardship view of accounting is to see the problem that accounting solves as the problem of organizations. In ancient times, stewardship accounting developed to handle the accounts of temples and sovereigns, as well as merchants or landed gentry who employed stewards to handle their estates.5 Organizations involve actions, thoughts, information, and motives of more than one person. With the development of labor markets, especially managerial labor markets, hierarchical organizations became an efficient form and stewardship accounting evolved to serve them.

The development of markets for financial capital has led to differentiation of publicly held corporations and financial-reporting model of accounting from simple bookkeeping and stewardship accounting for privately held firms. At the turn of the twenty-first century, the bulk of what we teach under the label of managerial controls consists of stewardship Issues arising from the existence of the managerial labor market. Planning and budgeting, divisional and managerial performance evaluation and compensation, decentralization, transfer pricing, capital budgeting, and various forms of variable and absorption costing including activity-based costing, are all concerned with the problem of control in organizations with managerial hierarchy. Stewardship or managerial accounting includes bookkeeping as its foundation. But the accounting needs of hierarchical organizations include the above-mentioned additional features absent in Paciolo’s description of the accounting practices prevailing in fifteenth-century Europe.

With the development of labor markets, especially managerial labor markets, hierarchical organizations became an efficient form and stewardship accounting evolved to serve them.  The introduction of scientific management by Taylor (1911) reflected development in the managerial labor market. Professional engineers and managers, who did not have the skills of the people they supervised, took over the control of the shop floor from the senior skilled artisans. With their education and planning skills these professionals overwhelmed the ability of the workers to control their environment. The latter resisted without success. Over the past century, the development of this aspect of accounting in the United States has closely paralleled the development of the managerial labor market. College programs in commerce and business have grown to serve the market. The University of Pennsylvania opened the first collegiate business program even as Taylor, a hometown boy, reshaped the future of manufacturing and management in neighboring Bethlehem.